“You’re the first one I’m picking up, so you get dibs on the front seat if you’d like!” the tour guide outside of my hostel smiled at me.  She was sweet and blonde and loved her job, you could just tell.  I opened the front door, feeling privileged.  I had envied the British man on my group this morning who had gotten to sit in the front and I’d wondered how that had transpired.  The front seat was still a part of the same compartment as the rest of the bus, but it was more comfortable and slightly private.  Talking to the driver here was simple.  She introduced herself as Heather.  She confirmed my suspcions by elaborating on her passion for giving tours of Anchorage and meeting new people.

Heather’s driving frightened me slightly at first.  She seemed almost distracted talking to me, but I quickly learned to trust her.  We picked up the rest of the people and took off for Seward to a wildlife animal refuge.  I was anxious to compare this refuge to the one at home where I often help my mom feed, clean, and medicate wounded animals that we later try to release to the wild.  On the couple hours to the site, we stopped off at Beluga Point in Chugach State Park.  This is where whale watching occurs in the warmer months.  Behind us, we scanned the mountains for goats.  I was disappointed to not see anything roaming about.  It was too cold for even the animals. 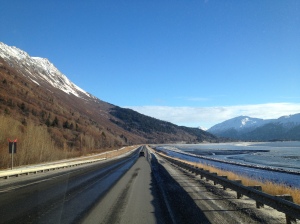 The drive to the Alaska Wildlife Conservatory in Girdwood was incredibly packed with conversation.  I took in the views of children playing ice hockey over miles of frozen lakes, all while being absorbed by talking to Heather.  We talked about hockey, her family, my family, my frustrations from living with my brother, what I was doing in Alaska, what I was doing in school, wind energy, etc.  We hardly remembered anyone was behind us in the bus.  Then we arrived and Heather pulled over by a pen for us to begin looking at animals.

The refuge was located in another typical valley between mountains.  Wind ripped through the corridor.  There were small barns and huts littered around a central welcoming center.  By each little building was a fenced in pen holding different categories of animals.  We stopped by pens of moose, bears, eagles, and more.  The bears didn’t feel like coming out and it took a while to coax them.  Heather called them by name, then said she felt guilty because she knew this trick meant they’d come for food.  But they didn’t come.  We only saw two dodge away into some distant bushes.

I went to the baby moose pen.  Two little guys were fighting over chunks of pumpkin.  The pumpkins all around the pens and welcoming center were remnants of jack-o-lanterns donated by locals.  I laughed as the babies butted heads, literally, over the same piece of pumpkin where there were dozens of other pieces at their feet, some bigger and meatier.  I then laughed again as they bent down to eat them.  Moose are so silly!  They bend their front legs and get down on their front knees to reach things on the ground.  How awkward is that!  I saw some people reach their hands through to touch the moose.  This angered me because the sign clearly said not to touch them – they could get diseases and die.  What good did touching that moose do for them if it posed such a horrible risk to the babies?  I wanted to touch them, but I refused to be a hypocrite.  They were funny enough just watching, anyway. 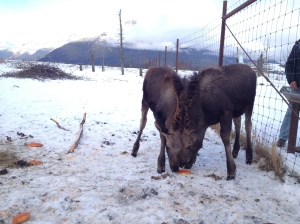 At another pen, I watched some elk stand around and watch us back.  Someone got too close to the fence and a male came charging towards it.  This was the moose Josh had warned me about; his group had arrived very early and done this tour before the day we did the glacier tour.  He said his cousin Brennan and Kaleb had intimidated an elk who charged them, too.  I looked at the majesty guy, defending his women.  He had wire tangled in his antlers.  Fighting fencings was apparently a hobby of his, and he felt victorious with every charge.

When we got back in the bus, we drove around to see the buffalo.  A Plains Indian man in our group got overwhelmingly anxious at the site of them.  I couldn’t help but smile.  Buffalo mean a completely different thing to him than most.  Signs told him not to go to near to the pens, but he couldn’t resist to get some good photos.  I took a picture of a raven perched watching us, then Buffalo Man joined me in viewing the lynxes.  “Bibi!  Bibi!” he kept calling to the pretty kitties.  They strutted around, jumping on logs and climbing down to sip streams of water, completely avoiding him.  I love cats.  I slipped around the side of the pen and stared at one quietly.  He stopped and stared back.  I lowered my eyes slightly, then raised them again to look at him questioningly.  He was ignoring the man calling “bibi” at his back.  I cocked my head and he began padding straights towards me.  He stopped in front of me.  I took a few pictures, then put down my phone and smiled at him.  “Bibi, let me have a photo!” called the man.  He rounded the corner and aimed his camera.  The lynx looked away from me, then jumped onto a log and began pacing again.  “No, bibi, no!” he said and he ran back to the other side to catch the second lynx.  That lynx ran from him and came to me as the other had.  This game went on for quite some time when the man finally laughed, gave up, and joined me inside the souvenir shop.  I bought some long-needed coffee from the single-serve machine.

The refuge was not at all like what I expected.  These animals aren’t supposed to be released.  However, when the snow falls too deeply, some get out, I was told.  No one bothers to find them.  How strange it was to see these animals penned when they looked perfectly set to run away.  I didn’t see any injuries, and most could have still been wild if they weren’t so used to people poking their faces through the fences.

It was time to leave.  I jumped back in with Heather and our completely-engaged-in-conversation mode started again.  This time, I quickly brought up Sarah Palin and how I was excited to be here, how I admire her.  Heather laughed at this.  I thought, Maybe people are sick of Sarah here?  Then, thinking harder about Heather’s age which I could deduce from the stories she told me, I realized she must be about Sarah’s age.  “Did you go to the same high school as Sarah?” I asked.  “Yes, well, not really.  We did go to college together, though,” she said.  I was trying to recall what college that was, then she answered.  “Back in Idaho.”  That’s right, Sarah’s family’s original from Idaho.  “Idaho?”  I was thinking, Why did you both go there?  Heather laughed, “Well, we were roommates!  With our other sister…”  “So you knew her-“ “She’s my sister!”  Then it hit me.  This was Sarah Palin’s sister Heather.  I couldn’t believe I didn’t see it before.  They look so alike, if you can forget the difference in hair color.  “Oh, I remember seeing your pictures in her book!” I said.  Heather rolled her eyes, “That book!  Oh, we were so angry about those pictures.  My father…” she went on to describe some very personal opinions about the book, her sister, and her family.  I felt somewhat honored to hear these stories and wondered if she would tell any ordinary person these stories.  When she was done, I said, “Well, I enjoyed them anyway!” and changed the topic, not wanting to make this all about her because of her sister.  Our conversation quickly returned to hockey, naturally.

When Heather went to drop me off, I was disappointed that I was going first.  I really wanted a picture of her, but I was afraid to ask, afraid to sneak one in, and afraid of drawing unnecessary attention to her – in case anyone else cared who she was.  I sadly got out and accepted I wouldn’t have a picture.  She announced to the bus to wish me good luck as I drove myself up north for the night and she said she feared for my safety, and have fun.  I thanked her – she was so sweet and I had so much fun already!  The bus pulled out and I got into my cold truck.  I had already transferred my bags from the lobby and was ready to go.  If only I had a CD… The radio sufficed for the time being.