Behold: The official main entrance of Denali National Park.  I had originally intended to spend the night here, but I was glad I stayed closer to civilization instead.  Following some winding paths up through the park, I was shocked to find several cars in the parking lots.  One couple was even sleeping in the back of theirs.  Like I said, it takes a certain kind of person… I turned to find the welcome center.  Walking on to the porch, I realized the lack of footprints and saw that it was closed for the winter.  My face knitted up into confusion; I knew they offered free snowshoe rentals in the winter, but why was the center closed?  That’s when I turned to see a bear sleeping 10 feet from me and I silently leapt a few feet into the air, startled.  My heart rate soared.  I froze.  The bear was silent and covered in snow.  I squinted my eyes, then laughed out loud – a bronze statue!  Curse you, park rangers!  What a cruel trick!

Walking back to the truck, I decided to check out the place where most of the cars were parked.  Sure enough, a building tucked behind some pines was the winter welcome center.  Inside, I paid a National Park Service fee of $10 and checked out my free snowshoes.  The woman raised her eyebrows at my personal information on the rental form which listed my home as Pennsylvania.  “You’ve come a long way!” she said, and I nodded, thinking, Hasn’t everyone come a long way to get here?  I rushed outside with my shoes, grabbed my camera, and began hiking, map in hand.  I wanted to do every trail, but I quickly realized how out of scale the map was and limited my goals: Find and take pictures of the bridge, then go find the husky pens. 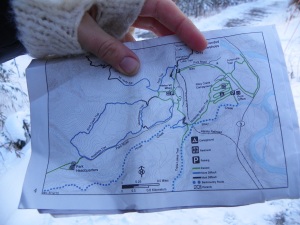 I took off on one trail and, within minutes, was lost.  I turned around.  I took another trail.  It looped back to where I had started.  There were trails before me that weren’t even listed on my map.  I became furious.  The woman had told me to be careful, that hiking was dangerous, especially alone.  You could get stranded and no one would find you for days, the park was so enormous.  I tried to listen to her advice and be careful for as long as my patience would let me, so for about 15 minutes.  Then I shoved the map angrily into my pocket and took off, literally running down the trail.  The work out felt great and I only passed one other lunatic on the trail.

I ran down a slope and into a valley.  Above me, I saw a bridge of sorts.  It was not the one I was looking for and it did not even appear on the map.  Nonetheless, I decided to cross the stream in front of me and go just a little farther.  Standing on the footbridge over the frozen stream, I stopped and took in my surroundings.  I held my breath.  Dead silence.  Then, suddenly, horrible cracking and humming sounds.  I jumped and spun around.  It was the gurgling brook, trapped by the ice.  It creaked and moaned and made me feel more haunted than anything else I had seen so far.  I took off over the next knoll and stopped, staring at miles of tree tops in front and no indication of where I was.  There were little paw prints scattered through the snow, but no indication of animals.  I froze at one point when I looked down to see large wolf-like prints that vanished at the base of the tree.  I looked up into the tree.  Nothing.  Puzzled, I turned around and began the trek back, frequently looking over my shoulder. 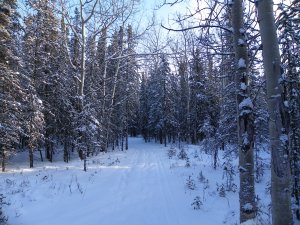 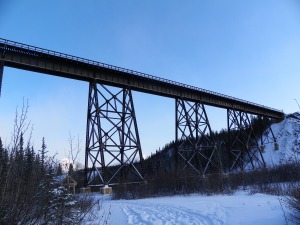 I was watching my time, and it was swiftly ticking away.  If I wanted to see the huskies, I knew I had to get going.  I thought I had been retracing my steps, but, as I walked around a trail, I was perplexed to find that my footprints were gone and that nothing but fresh snow and bird tracks lay before me.  Maybe I wasn’t following my own steps after all?  I continued down the trail and found the distinct point where footsteps had stopped and turned around.  I remember having done this and recognized the intersection.  I chose to continue in the direction I had refused to go and found myself rapidly approaching the winter welcome lodge from a different side.  Looking over the trees of the forest where I had just come from, I saw bright pink and purple mountain peaks, hazy with a localized winter storm terrorizing their landscapes. 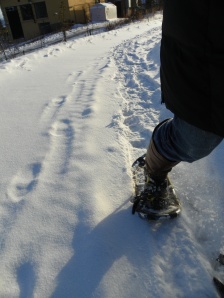 I returned the snowshoes, thanked the lady for my first snowshoe experience ever, and pet some wolf pelts on my way out the door.  She had indicated on my map where to find the husky pens, and I was relieved to find this road easier to follow.  I drove my truck a couple miles up a mountain side where I was greeted by signs about mushing, huskies, and the Iditarod.  Here was where they kept and trained dogs for mushing.  As funny as it might sound, Alaska was my first time snowshoeing, but I had mushed once before – in Pennsylvania!  Seeing the dogs and sleds brought back fond memories of racing through the woods in Ligonier when I was a teenager.  The man tending the dogs pointed out which ones were out for me to see, and I went around petting and hugging the happy, furry guys.

Huskies are so pretty.  I kept thinking about wolves and dog genealogy as I greeted each one by name, and laughed at how different their personalities were.  Each one would greet me with different degrees of friendliness, but all of the huskies licked my hands aggressively as I tried to move away to the next one.  I got a kick out of the yellow ice that had built up on the sides of the male huskies’ huts.  I was fortunate enough to see one dog who wasn’t in a pen; she was tied to a chain in a village of little, uncontained husky huts.  I hugged her and she was soft and warm.  Then I walked inside the building to marvel at the various sleds inside.  Checking my watch, I decided it was time to move on.

I was sad to leave the dogs and the park, and to turn my back to the unknown that lay north of me.  I wanted to keep going.  I wanted to go to Fairbanks, to meet people, to climb more mountains… but I knew I had a plane to take at about midnight.  I encouraged myself to hurry back by saying, “If you make good time, you can go to a nice restaurant in Wasilla a see a few sites before you go!”  And that’s exactly what I did.  Kissing a handful of postcards for my family and friend Keith, I dropped them in the mailbox on my way out and embraced my next few hours of winding roads.