Today started with a quick stop at the post office, then we headed northwest towards the Czech Republic.  The mantra soon became “Avoid the Czech Republic at all costs!” when we were stuck in long, senseless traffic due to construction and realized taking a shortcut through the country should be avoided on the way home.  It should have only taken three hours to get to Częstochowa, but it was not so easy.  We ended up stopping for lunch at a dinky little place on the way to Katowice that we thought was closed.  Nope, we were the only customers.  Regardless, I got some delicious espresso coffee, a beetroot barzszc, and more pierogi ruskie.  We got back in the car and listened to some American music until we finally arrived in the heart of Częstochowa.

It was raining.  It was raining when we left Slovakia, raining while we sat in the Czech Republic, and raining here in Poland, too.  Yards were flooded and creeks were scraping the decks of small overpasses.  I only had two one-złoty coins and Juraj had no Polish currency, so we found a small parking lot to leave the car in that had neither a meter nor a sign that said parking was not allowed.  Juraj asked me where we should go, but I said I had no real idea.  I was on a mission to learn more about my great-grandfather and to see his city, but I knew he was from a farm on the outskirts and that I had very limited information.  I decided to start with the church with the Black Madonna because, if nothing else, it should have some information to help us.

This endeavour lead us to the Jasna Góra Monastery, an enormous church up on a hill.  We walked inside and asked for help on the genealogy aspect of the voyage and were given some places to try.

Then Juraj and I wandered inside the many halls of the church, passing paintings, sculptures, even a room with rosaries and crutches hanging from the walls,… 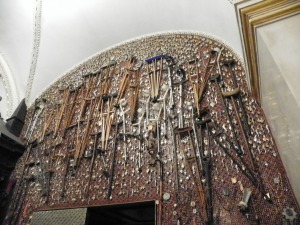 I stopped only when I reached the far room containing the Black Madonna painting.

I decided that was more than enough for me, so we headed towards the Wyższe Seminarium Duchowne where a lot of archives are held.  Alas, my great-great-great uncle, who was a Catholic priest in the town, was from a mystery diocese, so every search I made was blind trying to get more information.  Because I did not know his diocese, I also did not know for sure where my great-grandfather would have been baptized.  More shots in the dark.  On top of everything else, like the birthyear being somewhat ambiguous given the era and the importance of accuracy…well, the records of those years were also in Russian and the surname Machosky as we spell it today could have been any million of strange symbols in that book.  We went off of Jozef/Joseph most of the time instead because it was easier to read.

Finally I gave up, deciding I would need a lot more time to get anywhere and that I should save it for another trip.  Next, we walked around the town a little, got some coffee and souvenirs, mourned at there being only one public restroom with a charge, then we finally got in the car and headed the hour and a half towards Auschwitz.

The camp was eerie in the fog and misting rain, but we walked through the mud on our own anyway.

It was less elaborate and museum-like than we were expected, but we walked into several sleeping quarters and peered into various extermination windows.  A lot was under renovation. 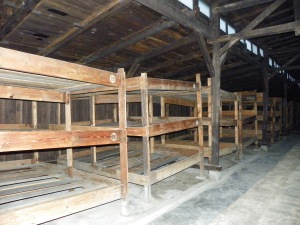 There was even a train car with rocks staked up on pieces of it, some with Hebrew messages painted on them. 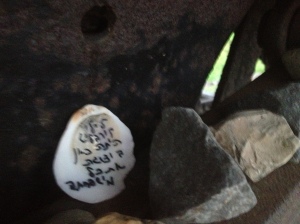 We headed out as the sun set and the museum started to close.  Finally, we had a dark couple of hours to drive home, exhausted.

I plan to head to Austria in the morning and spend the night in Vienna.  I will likely see Bratislava next on the way back to Juraj´s.