Today, we had a game in the morning against an American team.  I stopped back at Miromar Outlets for a Starbucks coffee and a snack, disappointed that there aren’t too many coffee shops around Estero.  We lost our game, then I left with three teammates and a friend for Calistoga Bakery Cafe where we had salad, mac’n’cheese, peach smoothies, etc.  After we ate, we went back to the rink because some of the girls had games in another division.  I took off in my car for Sanibel Island Beach, one of the places I visited and enjoyed last year.  On the way, I decided to check out Smokin Oyster Brewery but was disappointed to find they only had one bottled lager of their own and wasn’t much of a brewery.  I left there, continuing to the island, only to find that I didn’t have $6 for the bridge toll.  Instead, they took a photo of my plate (like they do if you don’t have a Sun Pass on the Turnpike in Florida – like  Bill-Me-Later).  Once on the other side, I went to the Lighthouse Beach where we had gone before, paid $2/hour rate for parking, and took all my beach gear out to the beach in case. 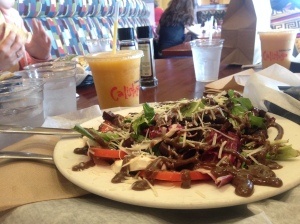 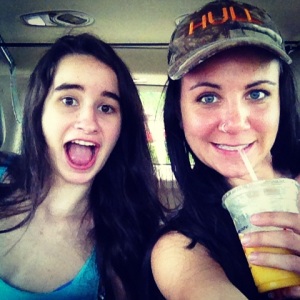 It was just like I had remembered it: not too crowded, but still a number of people.  I recognized the lighthouse off the beach where I had stood for my mom to take a photo before.  The water got deep fairly quickly and stayed calm quite a ways out, but there is a strong current that can come around the point if you’re not careful.  There are a lot of boats and jet skis off shore and you can see skyscrapers on the horizon from the other side of the inlet.  The waves weren’t big enough to use my boogie board and I doubted there was much to see with my snorkeling gear, so I decided to just swim and rest a little on the beach.  When I was done, I got in the car and headed towards Captiva – another destination from our last trip. 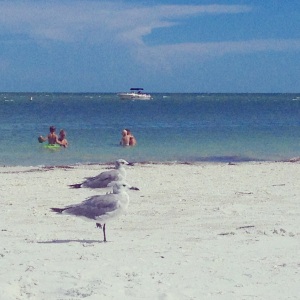 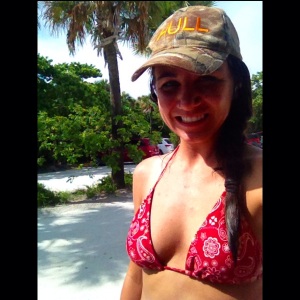 In 2011, my friends Allie and Adrienne, my mom, my brother, and I had all spent a whole day on both beaches.  Today, I was running out of time.  By the time I got through some traffic to Captiva Island, I needed to think about heading back – and the sun was getting lower.  I decided to come back tomorrow.  Instead, I sought out Cantina Captiva, the Mexican restaurant where we had stapled a dollar bill to the wall those three years before.  The walls were still covered in bills, but I couldn’t find our bill anywhere despite photo comparison to locate where we had put it.  It must have been removed.  Instead, I had tostadas, chips and salsa, and a small margarita while I colored a new bill with the markers they gave me and stapled it to the wall in a new place.  I recognized the Dos Equis cut-out my brother had clung to last time.  I was suddenly feeling very nostalgic, remembering how much had changed since then (and how I haven’t seen Allie or Adrienne since we left them at the Fort Meyers airport that July 2011). 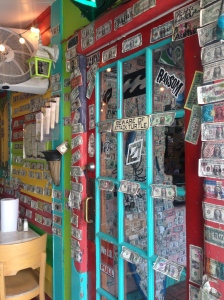 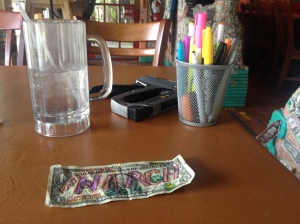 I left Captiva Island but yet again had a little spare time.  I was passing through Fort Myers, so I decided to try this hole-in-the-wall brewery called Point Ybel on San Carlos Boulevard.  They didn’t appear to have their own food, but I was still full from the tostadas.  I got to the rink in time and dressed for another loss to another American team.  After the game, I was invited back to my coaches’ house for pizza and Heinekens.  We sat up until very late in the morning, watching TV and laughing.  Then Vyctoria brought out a photo we had sent her 3 years ago of the two of us.  She was just 13 then and it was an accomplishment for her to play on the women’s team.  Now she was 16, taller than me, and fast – contributing well to our defense.  We posed for a photo of us holding the photo and reminisced on how it couldn’t really have been 3 years since then, how her friend was diagnosed with brain cancer right after I left and had died this year right before I had arrived.  We decided we need to take more pictures like this, oh – and get sleep.  So I went back down the street, past their seahorse mailbox, and pulled into Tyler’s for the night. 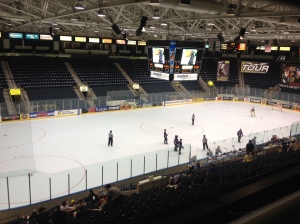 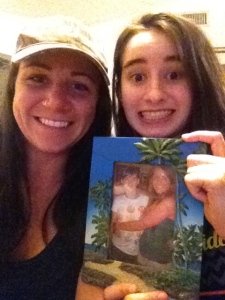 And now for a lot of photos and Instagrams.

Today was a day of hiking.  It began a little later than I had hoped because we were up so late the night before, but Jacob did indeed meet us at Claire’s apartment and we headed for South Table Top Mountain and the mesa.  It’s hard to remember we are in the desert until you feel the intense dryness of the air.  But it was in the mid 70s! 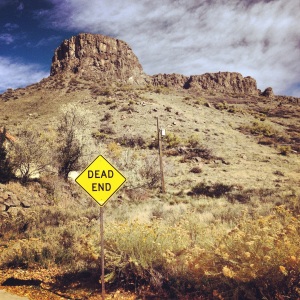 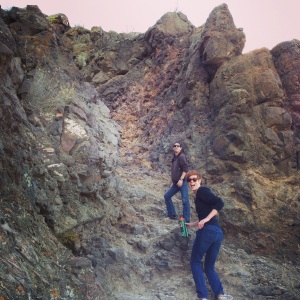 Claire and Jacob ascended the side. 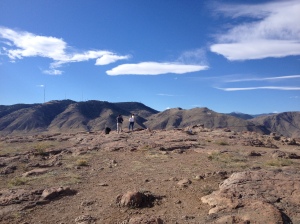 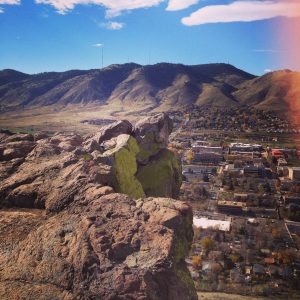 The three of us. 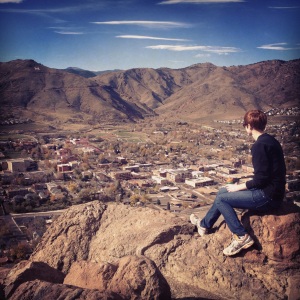 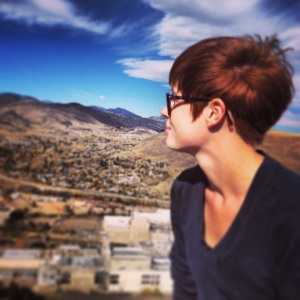 A long way done for a short climb. 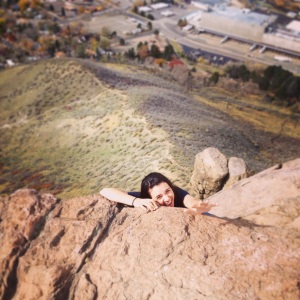 I did this at the Grand Canyon too… 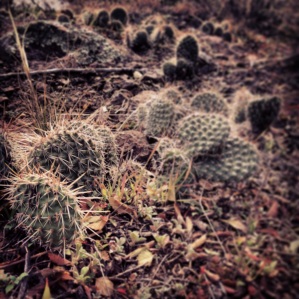 We encountered a mad snake on the way down, his rattle shaking.  Some hikers were trying to prod him off the trail with a stick.  Let it be, folks!  He just wants his peace.  We had to warn oncoming families with children and dogs. 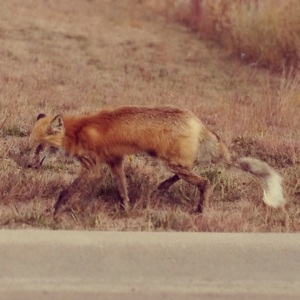 Driving back to Claire’s for some of my porter, we saw this scraggly fox dodging about.  Animal Control searched for him later but didn’t find him.

We were on that!

Next, my friend James hit me up to tell me he was done visiting his family and could come over until he had to leave for his flight.  He lives in Cleveland (we went to school together, the same place where Claire went before she got a job in Cleveland and subsequently moved west a year later), but he’s been working in Canada lately.  He flies every week and decided to come home this weekend.  I was very glad he came out to see us!  He caught up with the three of us while we were eating lunch at a Thai place in Golden.

Us after lunch in Golden.

Jacob said goodbye and headed back towards Denver to run some errands before making his 4 hour drive home.  Claire went back to school.  I jumped in James’ car and we headed north a short trip to Boulder.  He says he used to go there often during high school, but the times had changed and things already seemed different.  He was still a great expert to have.

People walking around the busy strip.

We walked up and down a couple of times on the main stretch before deciding beer over coffee.  We tried a place that seemed unfamiliar to James and sat outside with a local brew and some nachos.  We met some nice people lined up around us on a side-walk facing bar table.  We couldn’t stay too long because our time was running out.  The air started cooling off suddenly and I wondered if it was going to spontaneously snow.  We headed out before we could know.

Me and James about to leave Boulder for Golden.

James dropped me off at the Colorado School of Mines where Claire told me she needed to still work and gave me her car keys.  I took off for Lookout Mountain. 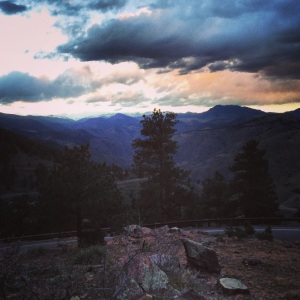 You could see the snow on the mountains in the distance. 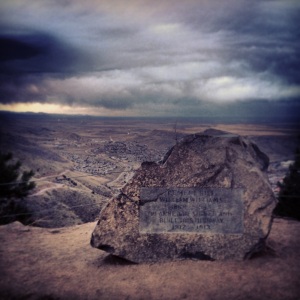 I decided to head towards the snow and turned around at the top of a mountain beyond Idaho Springs.  It was dark and snowy and the stars were out.  “Treacherous” (Taylor Swift) began to play on my iPhone.  It was so appropriate – the same song I played last year while driving through the dark and snow in Alaska.

And who would’ve thought that song still makes me think of the same guy a whole year later?  Well,… no need to go into that.

My summer song had become Gypsy Girl by Dean Brody after I felt just like a wandering, lost girl with tired feet.  This site name does, after all, mean “tired feet” in French – and there’s a reason for it!

But this trip, if I had to pick my theme song from this trip… I definitely think Mumford & Sons is the most appropriate.  And, although I have become a “Hopeless Wanderer”, the song that really shook me this trip while standing on the top of the world in the mountains was “Below My Feet”:

What could be more appropriate?  No classroom is better suited for learning than the outdoors, than the world.  Look at all these things I have seen this summer and continue to see.  And here I am, coming full-circle a year later, having witnessed the same struggles the people on the reservations face which exist in even the most remote corners of India.  Like I said last year (in ‘Defining “Native America”‘) on my final night with my friends in Alaska, We are all so different and yet…exactly the same.

My flight is too early in the morning for Claire to take me.  I hired a shuttle to get me at 3:30am, then we spent the evening finishing off my growler and watching YouTube videos and discussing Indian policies, the world, the folly of mankind…

I’m going to miss you, friend.

The next morning after our post-Bahamas dinner and outings was when the real goodbyes began.  I had said “probably goodbye” goodbyes to some people last night, but today the goodbyes were official.  Josh and I watched some Harry Potter in the morning before meeting up with Miranda, Andrea, Erik, and two of Erik’s roommates for brunch at the diner in Brockport.  I said bye, gave hugs, and reluctantly drove back to a somewhat empty campus immediately following the meal.

Meanwhile, my paper grade was returned to me along with the grade for my class.  I had one of the top grades in the class.  And, with that, an era has ended.  But I may take the research to AISES in Denver this fall, if all works out.  Who knows?!