1. Akureyri
We began our day with breakfast at the Café Berlín below our AirBnb.  I got what was essentially an English/Irish Full Breakfast, Icelandic style.  Our hostel was actually the Acco Guesthouse.  It’s like a very large hostel with rooms and a shared bathroom on each floor, a kitchen on the top floor.  I believe there were four separate parts of the building set up like this.  It was very accessible, though – near to Bláa Kannan where I spent my evenings using their new Wifi.  (They sell coffee/tea, beer, desserts, etc. and I was very productive in that space!)  From that area I could walk to the church and the indoor water park easily.

Before we left town, we drove up to the Church of Akureyri to see if it was open.  It didn’t open until noon, so we walked around the outside.  Akureyrarkirkja, as it’s called, is like the majority of churches (and people) in Iceland: Lutheran.  It was designed by Guðjón Samúelsson and completed in 1940 so that it towers above the city on a hill.  Inside, there is a pipe organ with 3,200 pipes.  A ship hangs from the ceiling following an ancient Nordic tradition for protecting fishermen at sea.  In the chancel, there is an opaque window that survived WW2 bombings to come from the Coventry Cathedral in England.  I had also read one of the windows depicts Þorgeir Ljósvetningagoði choosing Christianity for Iceland and throwing his Pagan idols into Goðafoss (which I mentioned here), but I did not see that – from the outside at least.

2. Hofsós & Blönduós
On the way out of Akureyri on the Ring Road, we noticed the stoplights are indeed red hearts.  I thought I was seeing things.  We noticed some hearts on other signs too on the way out of town.  Later, I looked it up: Supposedly these hearts were put up all over the city “as a consequence of the finance crash in Iceland in year 2008, when there was a need for some positive thinking and to put emphasis on what really matters”.

After some driving, we jumped on the 76 north and headed to Hofsós, one of the oldest trading ports in this part of Iceland.  Founded in the 16th century, this village was incredibly busy for a couple of centuries yet never developed into a town.  It was essential to the Danish Trade Monopoly, close to fishing grounds, and everything else that made it an ideal place to be at one time.  A nearby farm is near Massacre hill (Mannskaðaholl), named for the English marauders killed there in 1431.

The town was effectively dead in the winter.  Bummed we couldn’t get lunch there, we drove around the town a bit, took some photos of the hexagonal basalt columns on the shore, and headed north just enough to photograph the islands in the distance – one of which is apparently the Thorðarhöfði headland, connected to main shore only by low sandpits and a wildlife-rich lake.  The waves were crashing at surprising heights.  Then we headed back south to where we’d left off on the Ring Road and continued east on it to the town of Blönduós.  On the way we passed the monument to the Icelandic-Canadian poet Stephan G. Stephansson.

Blönduós is relatively new in terms of villages in Iceland.  Its harbour isn’t particularly good, but its main purpose was as the dairy center for the surrounding farms.  We stopped at the B&S Restaurant right off the Ring Road for some quick soup and pizza, then headed into town to see if there was anything exciting.  We stopped at the Textile Museum, but it was closed for the winter. 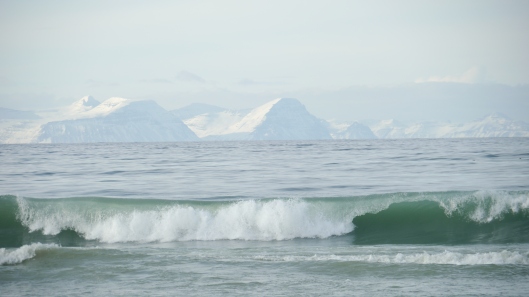 From that lot we walked down to the bay and along a trail.  There was a stone wall with rocks and crashing waves which created piles of ice at one point on the beach.  We stood there and photographed the area for awhile, imagining catching glimpses of polar bears floating in on icebergs from Greenland.  (However, I warned my mom we don’t want to see one float in – because Iceland has a strict policy for killing polar bears that come on shore.)  From there, we got things at the grocery store and made our way farther east on the Ring Road. 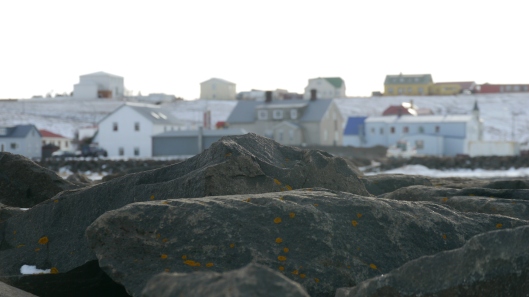 3. Hvítserkur & Borgarvirki Fortress
We turned right to go north on the 711 and drove the dirt road clear until we reached Húnafjörður’s shores.  This meant we kept west of the lake Hóp.  Here, we parked and descended a trail clear to a lookout deck – all to catch glimpse of a troll frozen in the water by the sunlight: Hvitserkur.  It gets the hvít (white) in its name from the guano that lines its sides.  The sun was starting to sink, and so we hiked back up quickly from photographing the sea arches and returned south down 711.  This time, however, we diverted onto the 717 to see the other side of the lake Vesturhopsvatn.  This route took us through a horse pasture and up over a steep mountain.

Here we had found the Borgarvirki Fortress.  This is a natural phenomenon – a basalt strata that is actually a gosstapi, or volcanic plug.  Centuries and centuries ago, the plug was altered with rocks lining it – indicative of its function as an early Viking fortress, high on a mountain that dominates the valley around it.  The Icelandic sagas affirm this fortress served as a military base in ancient times.  The fortress was renovated in 1949 as an actual site to visit and it now features a dial atop one of the walls which displays the distances and directions to a number of sites in the vicinity.

We left this fortress to continue to the 711 (then I accidentally headed west to the 704 when we meant to backtrack east to the 722 to our AirBnb).

4. Snæringsstaðir Guesthouse
Once I found the 722, we drove 15km south into the valley to find the Snæringsstaðir Guesthouse.  There weren’t too many options in the area for a place to stay, but this one was very nice.  It’s basically a hostel with shared space but several rooms.  For the first time (excluding shared space at Acco) on this trip we actually had to share with two other people who were in a different room.  We cooked some food we got from the grocery store and were able to watch the daylight fade across the valley, a small church nestled on the horizon.  It was too cloudy yet again to see Northern Lights.