We woke up to a cold, clear morning on the banks of Loch Ness.  We packed up the little that we unpacked and took off out of the campground before the owners found us.  We drove north a little ways until we saw the Urqhart Castle on the shores of the lake.  We stopped and waited for the castle to open, chatting to a nice groundskeeper who told us the best things to see in the area and explained why some castles were free and some have admission fees.  This one, he said, was strategic because it was the best way to see Loch Ness…and everyone wants to see Loch Ness.  We paid our fees and joined the long line of tourist bus visitors as we made our way downstairs for some soup and coffee.  We watched a short film on the castle’s history and were left to wander the ruins along the lake for a couple of hours.

When we finally left Loch Ness, we headed northeast a bit towards Inverness so we could catch a scenic route through the Northern Highlands of Scotland.  Our destination for the night was Glasgow, but our midpoint was the Isle of Skye and Kyle of Lochalsh.  We still had our camping food and wood in the car because we couldn’t find a suitable place to light a fire.  Who would have thought camping in Scotland could seem so difficult when it’s a right to park it anywhere?

The drive through the highlands consisted of several stops at photo points where we could see vistas, sheep, waterfalls, castles, lakes, and even once where we ran across train tracks after a short train passed.  The drive reminded me of my time in Alaska: very few people and very sporadic weather.  This time, though, we encountered mists and rain rather than blizzards as I had seen on my way towards Fairbanks last winter.  At one stop, we encountered French tourists.  It took me a moment to realize they were speaking French; I automatically comprehended.

Kyle of Lochalsh was busy.  We rolled in through the town and passed little village after little village.  There were frequent campers and boats at sea.  Numerous inlets lined either side as we crossed the large bridge onto the Isle of Skye.  We were originally going to go the length of the island, then we realized how big it is.  We chose instead to set up a fire along a beach and cook our mountain pies.  A seal of some kind paid us a visit as it peered out of the water along the intertidal, seaweed-littered shoreline where we were burning our kindling.  We found an old tire with a small crab in the water inside and realized how alive the shore was where we were sitting.  We opened sheets of foil and lined them with potatoes, corn, and beans, then wrapped them up with long handles and set them on the open fire until the flames died out.  We scooped out the food with what we could find and ate a nice hot meal.  No one bothered us.  We could watch the boats in the distance.  Before long, we decided to put out the coals and head towards Glasgow.

The drive continued to be beautiful, green, and slightly damp.  We stopped at an inn before we reached Loch Lomond’s reserve.  There, we bought some toasties and coffees before setting out again.  The last stretches before Loch Lomond were incredibly barren.  I found it hard to believe that a place can be so sparse after millennia of human inhabitation.  When we finally reached Glasgow, we parked our car in a large lot and were dismayed to find that every single place was packed for the night due to the Tattoo.  After a few failed attempts at getting a room and booking a room (and taking a cab to find it was closed), we skirted around drunk strangers and potentially rabid red foxes running the streets before we made our way back to our parking garage.

We were stuck.  Our rental was due back early in the morning, our bus was leaving before 7am (the only bus to catch our noon ferry from Cambeltown), and the parking garage wasn’t going to open until far later.  There was absolutely no way in or out; everything was locked.  We racked our brains for ways to take the car with us and pay to leave it in Belfast, anything to avoid messing up our schedule.  Sadly, we had not anticipated a packed city and a locked parking garage and had to make due.  I found a narrow hole in the bars blocking off a window on the first floor.  By scaling the decorative metal artwork on the façade, I was able to slide through this whole and jump into the garage.  Dan followed me and we ended up sleeping in the car for the night, accidentally setting off a security alarm but hiding in a dark car long enough for us to get away with the cold and uncomfortable night in a Glasgow lot.

Dan in front of the visitor’s center at the castle. 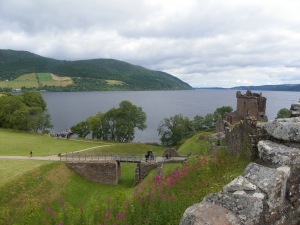 The castle and Loch Ness. 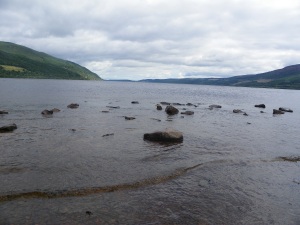 Stones at the shore of Loch Ness. 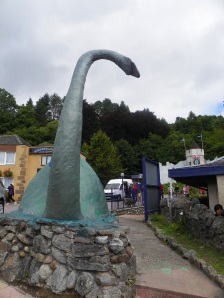 Statue of Loch Ness not far from the castle. 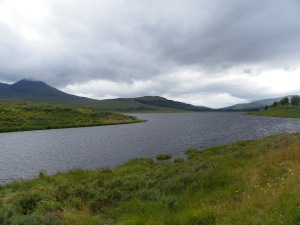 A random stopping point in the highlands with a nice view. 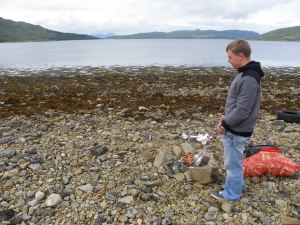 Dan overseeing the fire on Isle of Skye. 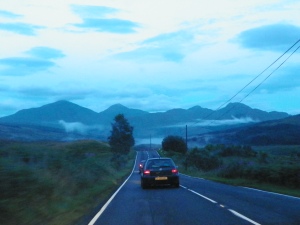