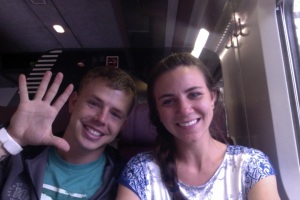 Packing in the morning was difficult because I was exhausted and had no motivation to leave Europe.  I can hardly believe I started this trip in India in May… it seems so long ago and yet not so long ago and I miss it.  As I put my things in my bags and checked out to find a cab with Dan, I began thinking about everything I did this summer.  This was really no vacation at all… everything I did was hard work.  Even India was a struggle.  Sure, I had teachers and students and a set itinerary – the closest to a vacation I could have.  But it had been 120 degrees Fahrenheit and I had a severe lack of sleep with all of the traveling we were doing.  I was required to submit papers and powerpoints during the summer alongside with articles for my column at home.  I left India to travel a touch on my own before meeting Juraj.  That was relaxing, but I was still working on homework and trying to keep in touch with my university.

When I finally left Juraj’s place, I had to start living out of bags again.  Hungary with Eva was amazing, then my delayed train to Germany started to stress me out.  This is when I really started lacking sleep and walking like a madman through every city I could to see as much as I could before I had to leave.  I remember almost missing my train out of Munich because I had gotten caught up in the sites and had to call a cab to run me back in time.  Then, Italy was hot.  So much hotter than central Europe which was under a cold spell and floods.  I got lost trying to find my hostel in Venice and then I got burned trying to eat in such an expensive place.  I found out I wasn’t going to meet my friends from home in Italy, then I met Jade.  And then…then I missed my train and got stuck an extra night.

Getting to France was horrible.  I had five consecutive trains and I was suddenly thrown into a no-English world.  I had to meet 25 other students who had already met each other and then I had two nights of rest before my biggest fear of the summer: moving into a host family.  My French host mom turned out to be great, although she doesn’t speak English (just some Spanish), and I was one of the few students completely alone.  My classes were easy and I started taking advantage of the trains to nearby cities, but it was hard to show up to class on time, do my homework, AND be traveling to other countries.  Having Johannes come down for the first weekend was amazing for Andorra and Spain, going to Lyon and Switzerland with Alex wasn’t too bad, but going to all of the other places my myself was miserable work.  Revisiting Spain was great, but Madrid was rough and my weekend in Nice and Monaco completely drained me.

Riding to Paris with Ariana was a treat, and I was so glad to spend the day with her and Dan.  Being with Dan…wow, I realized how little we have actually seen each other in person.  I hadn’t been to California for a few years.  It’s crazy how time flies.  The day we went out to Mont Saint Michel and Saint Malo was great and the views were amazing, but that’s when our troubles started.  The next day we missed our train and I got robbed.  But London was incredible, Stonehenge was fun, Wales, England, Dan’s family… seeing everything I wanted to see in Scotland up until we got stranded in Glasgow and spent an extra day in Campbeltown.  Then we’re back to where I left off, in Northern Ireland and Belfast…what a summer.

My flight in the morning took me on Aer Lingus from Dublin back to London.  I had to say goodbye to Dan.  I was so tired and trying not to acknowledge what was actually happening because I didn’t want to start trying.  Truth is, all I wanted was take Dan on that plane with me back to London and to not leave England.  I absolutely loved England, the people, Dan’s family, everyone.  And Dan seemed to fit right in, too.  I didn’t want to think about leaving because leaving meant not traveling and not seeing Dan for… who knows how long.  When I got to London after a short nap on my plane, my transatlantic flight was extremely delayed.  I sat at a restaurant to eat, work on my computer, and drink tea until it was almost time to leave.  The board outside of the restaurant still didn’t show a gate, so I went to Starbucks and waited until the gate appeared.  The line was ridiculous when I got there and everyone was upset.  I met a couple who had stayed four weeks in Scotland; the now live in Oklahoma but the wife is originally British.

I didn’t sleep at all on the plane.  I watched several TV episodes and some of Toy Story 2 until the connection failed.  I watched a movie on my laptop until the battery was about done.  Then I sat and wrote several pages in my diary, preparing a letter of all the things I never got to say when I said goodbye.  My arrival at Chicago was a rush as I was pushed into a line where a purple paper on the wall that read “DeVault” had my new plane tickets.  I was taken off of American Airlines and placed on United Airlines.  I had to find my bags, pass a million security points, go through customs, then come back to a counter to re-check my bag, take a shuttle, get to domestics, go through security again, then run to my gate to find a pay phone and call my mom just before the gate closed.  I left a message.  The flight to Pittsburgh was 55 minutes long and, thankfully, everyone was there when I arrived.  They were wearing the things I had sent them from home, my mom, my grandma, and my brother.  My dad was nowhere to be seen which is standard anymore.

I was exhausted and wanted to sleep, but we had to drive a couple hours to get shakes and drinks at Get Go near Bridgeville then drive my grandma back home near Connellsville.  Grandma had read all of my blog and had print outs of my pages.  She gave me a feather bracelet that I had wanted at a Pow-Wow.  It was made by General Grant, my favorite vendor.  The bracelet is hand-rolled silver and quite expensive.  Inside, she had “KAYLA / BUTTERFLY / GMA” engraved on it.  She also gave me a paper on which she had hand-written “I am Kayla, hear me rooOOAARR”.  The drive from Connellsville to my house was then another hour.  I ended up going to bed at what was 7AM in the UK.  I had hardly slept for several days now and I was ready to pass out and mildly confused that it was only 2AM here.