Today, I counted the days and discovered that it’s my fiftieth day since I left the US.  My summer is eighty-eight days long, thus I passed the middle-point the second of July, last Tuesday or also the day after my grandma’s birthday.  There are thirty-eight days until I return to Pennsylvania.  I had thought that I would be tired by now, perhaps too tired to travel a lot.  But there are too many countries and cities that I want to see!  This morning, I bought a ticket for a flight from Madrid to Marseille with Ryanair.  I will hike Friday from Cassis to Marseille to see the calanques, return home to eat with my host mom, and leave Saturday morning for Barcelona by train.  I will see Sagranda Familia like I want and some other monuments, then I will take another train for Madrid.  I can see the nightlife, spend a night in the middle of the city, and visit some sites on my way to the airport for a short, cheap flight.

But today…Today, I woke up very early to go to the café and write, read, and do my homework.  Alex found me and we finished our project for this week in our History of Photography class.  The day was a little boring because the classes were long and the lunch was at Dolce Vita again.  The best part was the cantaloupe sorbet with cantaloupe.  The afternoon, I tried to fix some administrative problems at my university.  When I returned home, my host mom said that we could eat dinner at 7:30PM, thus I went looking for some churches and other local monuments that I hadn’t yet seen.  Of course, a lot of things were closed due to the Suds and the expositions in these buildings.  It was also the last day for the second phase of Les Soldes: a good and a bad thing.  It’s a good thing because the clothes will but cheaper tomorrow, but a bad thing because they’ll also get picked over.  Thus, due to the heat, the prices, and my lack of clothes here, I bought some more sophisticated pieces that I can wear at my new job.  The cashier was very kind and asked me questions about my studies here in France.  We spoke French and he couldn’t tell that I come from America.

After, I ate with my host mom and learned that the boy kitten was given to someone and that just the girl kitten is now here with her mom.  She has less fleas than the other did, but my host mom is going to try to fix the problem tomorrow.  I hope that it doesn’t continue…I hate fleas, like everyone does!  I also wrote out the National Anthem of the US in French for my host mom like she wanted.  It’s difficult to translate!  And now, I am tired…

More pictures from me playing with the kittens and the flowers I saw on previous day trips: 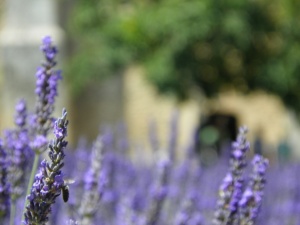 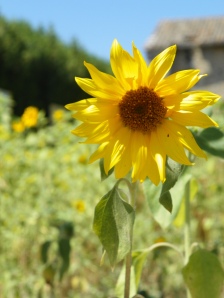 Today was a very long day.  First of all, I hardly slept.  Then we got up early for breakfast and hurried off to our bus.  We left by 8:30AM and it was already extremely hot.

Qutub Minar & Iron Pillar & Quwwat-ul-Islam Mosque
Our first site was the Qutub complex, built around 1192.  Our tour guide took us around the ruins and I was shocked by its size, complexity, and visitors.  These visitors were obnoxious, touching and picking at the walls and pulling at members of our group to have pictures the white students.

I took some pictures of brightly colored wasps and some lounging Indian Palm Squirrels.  We moved quickly to the next site.

Lotus Temple
Visiting this temple (built 1986), we weren’t allowed to take pictures, wear shoes, or talk inside.  It was already getting to peak heat when we took our shoes off and ran towards the straw mats to save our feet from the scorching marble tiles.  Again, I was shocked by visitors who spoke and took pictures inside the building.  We sat for a moment inside on the prayer benches, then hurried out to get our shoes and head to the next site.  Just after pulling out of the parking lot, every student was delivered one coconut with a straw from the stand outside of the temple entrance.

Jantar Mantar
This site is in fact a giant astrological center with buildings used to measure time up to a precision of one half of a second as well as some buildings meant for determining the equinoxes, etc.  We got yelled at for climbing one building to look inside.  The policeman blew his whistle, but we were just following the guide’s instructions.  Afterwards, we decided it was time for lunch and a break. 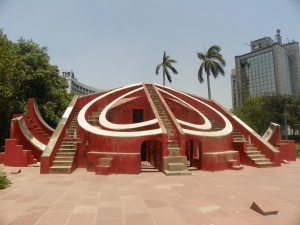 When we returned to the hotel, we had a traditional lunch and then two free hours.  I chose to find the pool and swim outside for a few minutes.  It was the hottest time of day!  Some others joined as well and we were given spinach lassis and frozen fruit kebobs.  Then I came back to get ready to leave again and to upload my pictures.

Akshardham
Finally, we arrived at the Akshardham area.  I really wish I had pictures, but we weren’t allowed cameras or anything due to past bomb threats.  We realized they were very serious about their rules when my friend tried to sneak my phone, her phone, and her camera in her bag and got them confiscated.  Another student had shorts on that came above her knee, so she was made to wrap a couple scarves around her to cover up.  We managed to negotiate picking up our confiscated goods after we were ready to leave.

First, we walked through the temple.  I wish I had photos of these evening visits – just check out the link to the complex.  It’s an incredible carving job of over 7,000 carvers for 5 years.  In the temple, an elaborate room was painted with real gold touches and dotted with actual gems.  We had to leave our shoes, yet again, but this time the shoes were mixed up and we were separated from the other half of our group.  I ended up with shoes that wouldn’t even go on my feet, so I had to walk across scorching pavement for a fair distance.  Thankfully, my feet grew numb quickly.

Next, we visited the museum with moving statues that told the story of the peaceful founder?.  It depicted his 49 years of life and was slightly bizarre.  People chucked money towards him in most scenes, but no one dared try to hit him or one of his followers.  Some children bowed in prayer.  We were ushered from room to room to see the exhibit at lightning speed.  The opening scene was dramatic and empowering, talking about how you can sculpt a human by taking your stone, your chisel, and your effort to shape yourself.  The last scene, after preaching life without violence, was a bunch of signs with animals saying things like “Mommy, why do humans raise us and kill us for sport?”   Or “Why do they eat eggs when we don’t eat their babies?”

We then rushed to ride a “boat ride”, which was really just like a park ride that floated through cave-like rooms with stories, music, and a narrator coming from our speakers.  By this point, I was falling asleep pretty intensely.

After the boat ride, we sat on the steps to watch the light show to music. It wasn’t that impressive compared to Bellagio, but I was surprised by the buildup.  It was also completely in Hindi.  I thought I saw a face projected into the one fan of water, but no one else saw it.  Police man paced the outskirts of the fountain with bomb-sniffing dogs, pressuring the crowd back as it kept slipping forward.  I liked the parts of the show where jets of water were interrupted and filled with orange light to replicate glitter falling.  I also recognized a large peacock made from the lights dancing in a colorful fan.

We grabbed North Indian food at the Premvati food court, then went to catch our bus and return to sleep.  We leave early in the morning.  My roommate is finally arriving, but I’ll probably be in bed before she does.  Hopefully this won’t keep me up if we’re leaving so early!