After working for a couple straight weeks and pocketing a fair share of overtime cash, I decided I wanted to make something more out of my next trek out of Ohio.  I play for the Tri-City Selects, a North/South Carolina ice hockey team for women that is based out of Cary in the Raleigh area.  We have home games this weekend and my drive is a fair eight or more hours from Cleveland.  Last trip, I stopped off at home in Pennsylvania.  This time, I decided to pick a new city.  Why not Asheville, North Carolina?  I’ve heard so many good things about it and it’s in the mountains – my kind of city.  The visit would add four hours to my driving, the distance between Asheville and Cary to the east, but I decided to book a hotel on Hotwire and just go for it.

I left work as soon as our chili cook-off was winding down.  I ended up winning the contest, to my surprise, and I delivered some chili to coworkers who were on-site at a job that was on my way to Asheville.  It was nice to drive two hours to just before the Ohio border and take a break before continuing another six.  The length of West Virginia is the longest in the drive and I usually prefer its windiness over the boring Ohio roads, but this time it rained all but about 20 minutes of my drive and most of the trip was in the dark.  By the time I got to Charleston, I just couldn’t wait to cross another border.

Normally I would take I-77S to I-40E in North Carolina, but this time I got off 77 at Wytheville (WITH-ville), Virginia and jogged southwest to Bristol, Tennessee – the town I wrote about in one of my past entries.  I turned back east again around Johnson City and passed through the Cherokee National Forest, hitting the North Carolina border in the mountains.  Maybe 20 minutes later, I was already in the heart of Asheville, Appalachian North Carolina.

I had an ambitious list to complete before my game tomorrow night in Cary, so I decided to check into my hotel later and instead went straight to the first place.  I grabbed dinner at The Admiral, a dimly lit and extremely tiny garage-like shack with a peculiar side entrance and limited parking lot.  Inside, the place had very little seats – which could explain why I couldn’t find reservations during any time of the two days I will be in Asheville.  The lady on the phone had told me to either come early or look for a bar seat.  I managed to get a bar seat within 30 minutes of close.  I scanned the menu and selected the order with spaetzle without thinking that “sweetbread schnitzel” meant meat.  When it arrived, it was accompanied by greens, capers, and mustard foam. 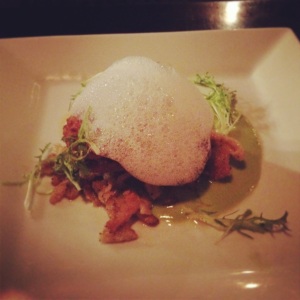 I don’t eat meat, but I ate it anyway and it tasted just like a dish my mom makes.  The serving was tiny but the service was incredibly fast and I stuck with only that course.  The Admiral in West Asheville really is unconventional, an affordably fancy place with an open kitchen that reminds you more of a hamburger joint.  You can understand why their website describes it as “The elegance of a clipper ship in full sail with the practicality & elegance of a cinder block.”

My next stop was downtown Asheville where I started at the Thirsty Monk.  This bar is unusual because it has an upstairs with American beers and a downstairs dedicated to Belgians.  I went to the basement bar and had a number of Belgian brews.  Making friends with the bartender was definitely in my favor for she kept giving me tastes of different kinds.  I started with a full Catawba Chocolate Saison, followed by a half of Triple Van de Garre. 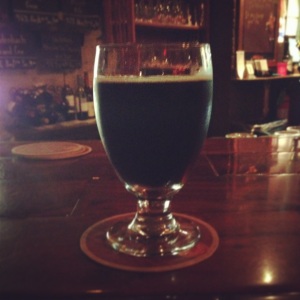 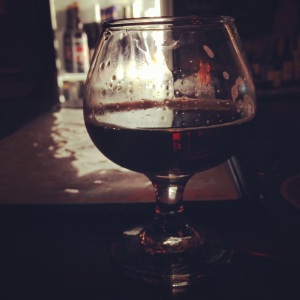 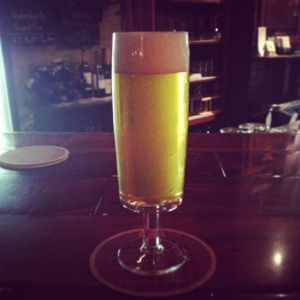 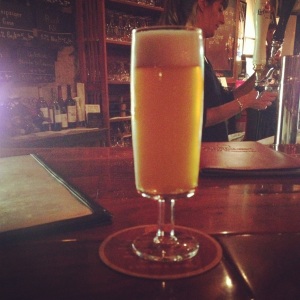 I was given some of the bartender’s favorite, the Rodenbach Grand Cru.  It was bitter and cherry, so I next picked a similar half with the St. Louis Gueuze Fond Tradition.  I decided to head out and the bar tender offered for me to go out with her when she got off her shift, but I found that I was way too tired later.

My last stop of the night was thus Wicked Weed.  I took at table and was shocked at the garage door-like side being rolled up and all of the people sitting around torches in the cold outside.  I had a Sir Ryan the Pounder Session and snacked on boiled peanuts cooked with IPA and sumac.  I lingered for awhile before deciding it was time to check in and go to sleep.  I drove to the Tunnel Road area and checked into Days Inn, then was asleep by not long after midnight.  I wanted to have the energy to finish my list the next day. 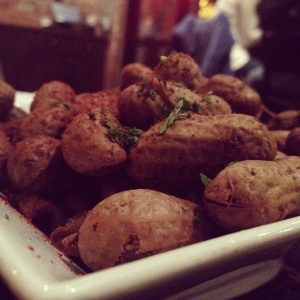